If you have been a school principal for any amount of time, you would most likely agree the job has become much more challenging and complex over the years, and the research supports this claim. In a survey conducted by MetLife in 2012 and reported in 2013 entitled, The MetLife Survey of the American Teacher: Challenges of School Leadership, 75 percent of school principals reported their responsibilities have changed significantly in recent years, leading to a job principals say has become too complex and highly stressful, and almost half of those surveyed reported feeling under great stress several days a week. Consequently, per the survey, 32 percent of current principals are likely to leave the profession for another occupation.

The types of challenges facing school leaders today may range from pressures to raise test scores, hold teachers accountable while nurturing their development, and create schools which serve all learners with equity and excellence. It is for these reasons and more we must have a conversation about the courage required to take on these challenges and make the tough decisions that come with them.

In this article, I will describe everyday courage for school leaders and offer strategies for developing a courageous mindset to meet these challenges and lead more effectively.

What is Everyday Courage?
Everyday courage is not about heroes or heroism. Rather, it is about the grit and determination necessary to make tough calls that keep the best interests of children ahead of all other concerns in a school. It is about facing the daily leadership challenges with a willful spirit to support the ideals of equity, excellence and inclusion for all students, even when it is not easy or convenient. Making decisions aligned with these ideals may cause fear or anxiety because they challenge the status quo, irritate a privileged group or lead you into uncharted waters. This is everyday courage, and it is the kind of courage school leaders need to succeed.

Four Types of Everyday Courage
More specifically, everyday courage consists of four distinct types of courage that when activated will enable principals to face the daily challenges inherent in the job. These four types of courage are described and illustrated (Figure 1.1) below. In sections which follow, the types of everyday courage are discussed in greater detail to clarify and explain each one as it relates to the work of school leaders. 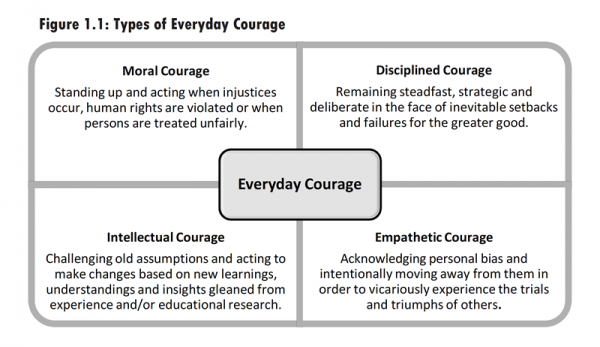 Moral Courage
Moral Courage is the courage to stand up for one’s beliefs in the face of overwhelming opposition. It is a synonym for civil courage. Moral Courage is the outward expression of the leader’s personal values and core beliefs, and the resulting actions are focused on a greater good. According to the research, what distinguishes moral courage is brave behavior accompanied by anger or indignation, which intends to enforce society or ethical norms without consideration for one’s own negative consequences. (Greitemeyer, Fischer, Kastenmueller & Frey, 2006). It is best exemplified by the actions of people such as Mahatma Gandhi or Rosa Parks.

As it relates to Moral Courage for school leaders, Leithwood, Harris and Hopkins (2008, p.28), point out principals can have an impact on pupil learning though a positive influence on staff beliefs, values and motivation. They further report in recent studies in the U.S. and United Kingdom, what stood out among the leaders who undertook the challenge of taking on very difficult-to-serve schools was their ‘moral purpose,’ a fundamental set of values centered on putting children first and faith in what children can achieve and what teachers can do.” The moral purpose of improving the lives of children is ever-present and directs the leaders’ actions and decisions toward that end. In short, moral courage for school leaders acts in service to improving learning for all students.

Examples of Moral Courage around an equity, excellence and inclusion agenda might include intervening in and changing school practices that over identify African-American male students for inclusion in special education, or it could involve maintaining persistence in dismissing a teacher who has been doing educational harm to students while previous leaders have failed to act. Moral Courage compels action that insures the social, emotional and academic well being of all students. Finally, Moral Courage is inclusive of several other types of courage and as such is an essential component of everyday courage in school leadership.

Intellectual Courage is relevant to school leaders because inevitably you will be confronted with new research or new practices which conflict with current practices and understandings. Intellectual Courage allows you to recognize the limitations of your own thinking in such circumstances and embrace new information as an opportunity to improve. School leaders must be open to new findings, conclusions and recommendations which have the potential to revolutionize their thinking and have the courage to share the new ideas with potentially resistant teachers. Knowing the research is not sufficient. Acting to bring on change based on the research is required.

Think of Galileo’s courage to argue the Earth revolves around the sun based on scientific evidence or modern environmental scientists arguing climate change is the result of man’s toxic gas emissions and destruction of rain forests. Their ideas were received with much skepticism, criticism and denial. Now, think of John Hattie’s revolutionary research in Visible Learning. Many old assumptions about what works in education have been disproven in his research, thus challenging educators, policymakers and researchers to rethink positions on certain favored instructional practices.

Finally, successful school leaders demonstrate Intellectual Courage when they seek to learn and understand contemporary research and apply new evidence to current practices that either are or are not working for students. Failure to do so, or failure to act on what we know is best for students, is the opposite of Intellectual Courage, it is actually intellectual cowardice, and some might argue is morally unacceptable. Intellectual Courage is a call to action to close the infamous knowing-doing gap. Thanks to Professor Hattie and other educational researchers, we know what works best in education, but it takes courage to act on this knowledge to lead change on behalf of all students.

Disciplined Courage
The third component of everyday courage is Disciplined Courage. Disciplined Courage is the courage to be reflective, strategic and focused in the face of constant distractions and opposition. Leaders with this brand of courage have great clarity on their vision and the impact they want to have on those in the school community. They are focused on doing the right things, in a thoughtful and purposeful way. Mike Staver, author of Leadership Isn’t for Cowards, explains it this way, “Courage is about clarity and mindfulness—clarity about what you believe and mindfulness in the execution of those beliefs in the culture.” (p. 14).

Disciplined Courage enables leaders to steadfastly address important issues and maintain a focus on the goal or desired outcome. It requires endurance and flexibility especially when implementing complex change. When setbacks and disappointments occur, Disciplined Courage helps leaders stay the course, connect with their resolve and persevere through the challenges and keep moving. It also allows them to keep their emotions in check to learn from the opposition and compromise along the way to achieve the intended outcome with the integrity of the goal in tack.

Empathetic Courage
The final type of everyday courage is Empathetic Courage, or the courage to open and feel deeply for others. It takes humility and courage to put aside your own biases and assumptions and let go of control and certainty for the sake of learning something new. But it is only when you are willing to listen to a different perspective, and manage to empathize, that you can be enriched by a new way of thinking.

Daniel Goleman, psychologist, author of 10 books, and two-time Pulitzer Prize nominee for his work on emotional intelligence, tells us there are three kinds of empathy all leaders need to know and use. These three types of empathy include cognitive empathy, emotional empathy and empathetic concern.

Cognitive empathy is the ability to see the world through another person’s eyes. It helps us connect with another person’s mind giving us a mental sense for how they think and see things. This is a critical skill in the workplace which enables strong relationships and effective communication to motivate, inform and support the people we work with.

Emotional empathy allows us to tune into the feelings of another person and read their facial, vocal, and a stream of other nonverbal signs which illustrate how they feel. According to Daniel Siegel, a UCLA psychiatrist, connecting with people on this level creates a “we” chemistry in the brain that builds rapport and understanding that results in productive and meaningful work for both parties.

The third type of empathy is empathic concern, or expressing care and concern about another person. Leaders accomplish this kind of connection when they show people they will be supported and they can trust the leader. This encourages people to take risks, try new approaches and open up to others for collaboration and team learning. Goleman stresses it is essential for leaders and teachers to have all three kinds of empathy.

Examples of Empathetic Courage, which includes Goleman’s three types of empathy, might include holding students and staff to high expectations while empathizing with them as they struggle with learning something new and experiencing failures along the way. Or, holding a student accountable for unacceptable conduct while also showing empathy for the student’s challenging home life. A leader demonstrating Empathetic Courage has high performance expectations and clear goals, while personally sharing the feelings and struggles of people as they attempt to meet them.

Conclusion
Finally, everyday courage, including moral, intellectual, disciplined and empathetic courage, requires explicit practice and discipline. It is morally based and works in service of equity, excellence and inclusion of all students. It is intellectually grounded while maintaining a strong connection to the human condition. Everyday courage promotes and facilitates leadership from the whole person—the heart, the head and the gut. School leaders who skillfully leverage all four types of everyday courage will succeed in the complex, ever-changing role of school principal.

Dr. Cathy Lassiter is an author and consultant for Corwin Learning.

The Texas Elementary Principals and Supervisors Association (TEPSA), whose hallmark is educational leaders learning with and from each other, has served Texas PK-8 school leaders since 1917. Member owned and member governed, TEPSA has more than 5,900 members who direct the activities of 3 million PK-8 school children. TEPSA is an affiliate of the National Association of Elementary School Principals.

Sign up to receive the latest news on Texas PK-8 school leadership.